Through the Grape Vine

B.C. Wines and the Success of the Okanagan Valley

The accelerated growth of B.C.’s wine industry over the last decade has been nothing short of amazing. Still, the wines of our westerly neighbours have generally flown under the radar of the global wine market.

Lately though, it seems the rumblings out of B.C. are getting closer and closer to a looming fever pitch. It might be time to ask: Did B.C. skip the radar to go straight for the helm?

That was the number of licensed wineries in B.C. twenty years ago. Now there are 270.

The industry has grown more than eight times in two decades. To put that in perspective, in that same timeframe, McDonald’s expanded globally 2.6 times.

How d’ya like them apples, McDonald’s? Or, given this particular idiom, should I say grapes?

Of these 270 wineries, the Okanagan Valley region is home to about 130. From its most northern sub-region of Lake Country to the southernmost Osoyoos, its soil, temperatures, and grape varieties – of which there are more than 60 – make up about 250 kilometers of southeast B.C. and produce about 90 per cent of the province’s wine.

That was the number of licensed wineries in B.C. twenty years ago. Now there are 270.”

But climate isn’t everything. Sometimes the traits that make a region interesting are also the best tools for growing. Volcanic Hills Estate Winery, set at the base of a dormant volcano, see their vineyards flourish by utilizing mineral rich volcanic soil.

It’s too bad not every winery comes with a volcano. For Volcanic Hills, it makes for sustained yearly growth, uniquely flavourful wines and arguably the best naming convention ever.

“We have three different Magmas,” says Bobby Gidda, President of Volcanic Hills. “We recently won Best New Arrival and the Okanagan Spring Wine Festival for our Magma White. And our Magma Red recently won a gold at the All-Canadian (Wine Championships) in Ontario.” 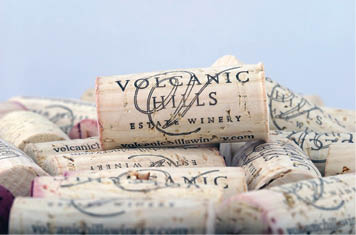 As a tourist destination, many Okanagan wineries offer more than the conventional tastings or tours. Township 7, boasting more than 100 wine awards, is known for several events and fundraisers.

Basically, they are saying you can drink wine and make a difference.

“Our overall objective is to provide people with an experience,” says Trevor Allen, manager at Township 7. “Wine should be enjoyed with friends, family and food. It creates memories. That’s what we want to do.”

Ongoing Township 7 fundraisers include Bard on the Bench; a vineyard-set Shakespearean play, and Art in the Vines; a showcase for local artists.

As with most Okanagan winemakers, as well as others throughout B.C., wines are generally made using 100 per cent B.C.-grown fruit.

“All our grapes are grown here in the Naramata Bench [an Okanagan Valley sub-region],” says Gavin Miller of Upper Bench Estate Winery. “Purity of product is something I very much believe in. The wine in the bottle should reflect the grape and where it was grown.”

Gavin and his wife Shana own both Upper Bench and a state-of-the-art creamery. If you’re in the Okanagan for an authentic wine and cheese pairing, it’s unlikely you’ll find a winery more knowledgeable on the subject. In keeping with the Okanagan style, 100 per cent of the milk used at the creamery comes from a local farm Shana personally visits.

The Okanagan’s twenty-year trajectory hit a milestone in 2013 with Mission Hill Family Estate being recognized globally by Decanter magazine for the world’s best Pinot Noir. Meyer Family Estate, only operational since 2006, now ships wine to Japan, China, the U.K., the U.S. and the Philippines. And, according to a study released in spring 2013 titled Canada’s Wine Industry – Ripe Robust Remarkable, last year the B.C. wine industry had a $2-billion impact on Canada’s economy.

In Alberta, we might not think about it as much, but when we, as Canadians, talk about the wine market, it’s important to remember that our neighbours to the west have made a huge splash in a very short time.

You need to be at Calgary Beerfest this year – Here’s why!

Celebrate a Canadian Culture With Caesarfest!

‹ Brewster’s: A Tradition of Innovation › Tenuta Chiccheri: A Startup With History